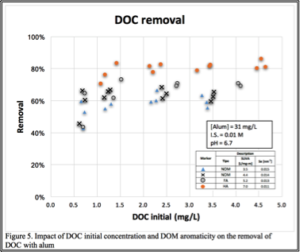 Full Abstract: In water treatment with metal-based salts, Hg(II) is preferentially bound to the aromatic fraction of dissolved organic matter (DOM). At low Hg(II) concentrations, it has been suggested that the reduced sulfur ligands in DOM play an important role in removal of Hg from solution. These ligands that effectively complex Hg ions appear to be similar in DOM from different sources. However, at higher concentrations carboxylic and phenolic content may be the key to Hg(II) removal. Indeed, the carboxylic and phenolic content in DOM is up to 2 orders of magnitude higher than reduced sulfur. This project examines the role of sulfur and carboxylic ligands in Hg(II) removal during alum coagulation. The research plan consists of examining Hg(II) removal in the presence of DOMs with varying sulfur and aromatic content. Both macroscopic and spectroscopic analyses are used to identify the role of different ligands and the importance of DOM adsorption to the precipitating Al(OH)3(s) solids. The selection of a conventional treatment process, such as alum coagulation is based on its widespread use in developing countries affected by artisanal and small-scale gold mining (ASGM), an activity which pollutes drinking water sources with mercury., Thus, the results from this research will be used to guide water treatment plant operations to optimize Hg(II) removal in these regions. 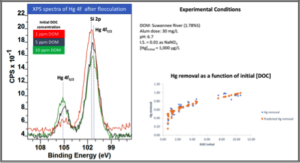 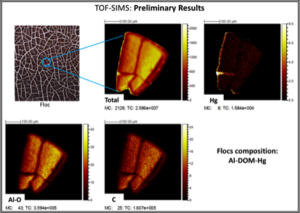 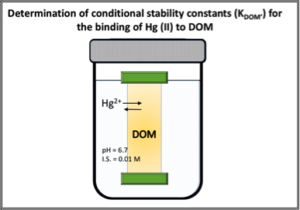