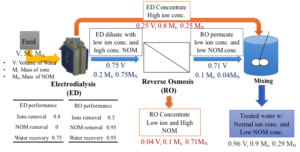 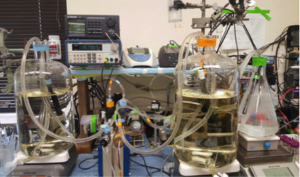 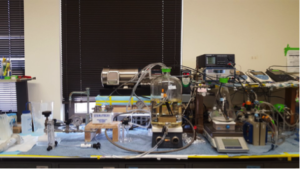 Full Abstract: Natural Organic Matter (NOM) refers to organic material present in surface or ground water. NOM reacts with Cl2 and other disinfectants to form disinfection byproducts such as trihalomethanes (THMs) and haloacetic acids (HAAs) that can increase the risk of cancer. Removal of NOM prior to disinfection can indirectly reduce health risks associated with both regulated and other DBPs. Coagulation/flocculation and membrane processes—such as ultra filtration (UF), nano filtration (NF), and reverse osmosis (RO)—are possible methods to remove NOM. In this project, we are evaluating a novel coupled electrodialysis (ED)-RO/NF system in which ED is used to temporarily remove ions, and RO (or NF) to separate NOM. The ED unit can remove most ions while achieving minimal removal of NOM, because the diffusivity of NOM molecules is much less than that of common inorganic ions. The diluate from the ED system, containing few inorganic ions but NOM at nearly the influent concentration, is then treated with NF or RO, with the result that the concentrate from this second process should contain most of the original NOM and few of the original inorganic ions. Finally, the concentrate from the ED system will be recombined with the permeate from the RO, resulting in water with nearly the same salt concentration as the original water but with greatly reduced NOM concentration.