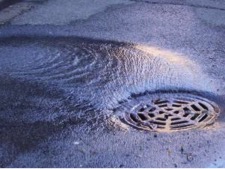 Some findings of the recently completed NCHRP Project 25-32, Measuring and Removing Dissolved Metals from Storm Water in Highly Urbanized Areas, are highlighted. One objective of the project was to assess the potential for adsorption to reduce the concentration of dissolved heavy metals in highway runoff. One of the major difficulties of this type of work is capturing the impacts of background organic matter and other complexing ions on adsorption behavior in multicomponent systems. To address this difficulty, the synthetic stormwater used in this evaluation included natural organic matter (extracted from actual highway runoff) as well as the typical inorganic constituents. A series of column experiments was run with iron oxide, manganese oxide, Portland cement concrete, and crab shell waste as adsorbents. Factors that were evaluated included organic matter concentration, competition between metal ion species, pH, ionic strength, and alkalinity. Results of the column experiments indicated that iron oxide removed dissolved metals substantially better than did manganese. Both Portland cement concrete and crab shell waste were effective at controlling pH, which was the largest factor in determining the removal of dissolved metals; adsorption capacity declined by more than an order of magnitude at elevated concentrations of organic matter and elevated alkalinity. These experiments indicate that the addition of iron oxide plus concrete or crab shell may be a cost-effective way to remove dissolved metals in highway runoff.